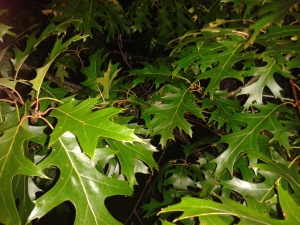 I have my own hens now.  My sister gave me 4 of her hens.  White ones – specifically Leghorns or to me “the ladies” or “whities”.  Now that I know what type of hen they are I can find out more about them.  Anyways, it’s been interesting learning about their habits.  They were trained to go in the coop by themselves at dusk.  They just did it.  Now they are in a new home and for the first few weeks they have been doing this.

But for about the last 5 days their sleeping habits have changed.  It started off with two of the hens choosing a place outside.  The first night I found one under the car.  I had to move the car a little and pull her out.  I put her in the coop.  The other was settled in a peony bush (is it called a bush or a plant?  It looks like a bush.)  For the next couple of nights I found one in the peony bush and I couldn’t find the other hen.  At first I thought maybe an animal got her, but she returned in the morning.  I could imagine where the other hen might have been hiding because I couldn’t find her anywhere.

The nice thing is that they are white.  When you are shining a flashlight around in the dark they tend to stick out when the light hits them… thankfully!  The last two nights they were in the coop because they got grounded.  Yes, I grounded the hens hoping they might learn a lesson.  Not a chance!

I came home tonight, in the dark, and found no hens in the coop!  OH NO!  Did an animal get them all, especially since I couldn’t find them anywhere!  I was just about to give up looking for them and hope they returned in the morning for food when the light from the flash light went into one of the trees in the front yard.  Is that a white blob I see.  Hens… are you in the tree?  Sure enough on the first set of branches up in the tree there was a hen!  Sleeping.  Then I looked a little more in the tree and found 3 hens huddling together on a branch.  Really hens!  Thanks for almost giving me a heart attack and thinking the coyotes got you!

So when hens don’t get into their house before it gets dark, they find a place near where they are and settle in for the night.  So my hens decided to sleep in a tree for the night.  At least now when I have a hen or two or four missing I’ll know where to look for them.  And at night they are a little dazed from sleepiness so they are really easy to pick up and put back in their home.

I also found 4 eggs in the basement window well.  No wonder I’m not getting eggs from them everyday!

That’s some of the joys of having hens!  I still haven’t named them.  I think I might call one of them Peony.  Now just to figure out a way to tell them apart!