Erin, Julie, and Sue before the 5K run.

Saturday was the big run day! We were very excited and happy that it was not at 6am. ﻿We got in the car and headed to Cambridge. We arrived shortly after 8:30am. We thought we were going to be there early, but there were already a few people there. We stood in line and got our running kit, timing chip, and handed in our pledges. Then we sat and sat and sat. Finally it was 9:45 and we took our stuff to the car and waited for the race to start.

It was interesting because we were in the middle and I heard someone say they thought they heard the national anthom. The front of the line started to get quiet and then the quietness worked its way back to the middle and then the end of the street wide group of runners. Silence. After the national anthom and a bit of cheering, the bag pipes played and at 10am we had 2 minutes of silence.

I don’t remember hearing a gun shot to start us off or really anything. All of the sudden everyone in front of us started moving. You could tell some of them really wanted to get going. We started at the Preston Legion and worked our way to King St. We were bunch together until we turned onto the road before King. By the time we hit King and Eagle people were more spread out and continued to be more thinned out as we went along. We were jogging with about 5 soldiers along the way. They were in their full gear. Boots, backpacks (including sleeping bags), and uniform. It was pretty cool to see them running. We would pass them and they would pass us until we hit the mark to split off for the 8K and 5K. They took a left to continue on the 8K trail and we veared to the right to take the 5K trail.

At 1K we cheered. We were happy. Although it seemed a lot harder then when we do it on our route that we are so familiar with. We know the ins and outs of the route and how much further we need to go to be finished our jog. Saturday was different. We didn’t know the route. We didn’t know where the street was that tells us we are half way done and the street that let’s us know we are almost finished. We also had breakfast before we ran. I know for the first 2K’s I could feel it in my side. I’m very thankful for the energy from the food. After I got in a routine of jogging I found it much better. I focused my breathing and concentrated on my setps.

Yeah, the 2K mark! Shortly after the 2K mark we did walk for a few minutes – probably about 5 minutes. Then we hit a dirt trail (we were in Riverside Park) so we decided to jog again on the nice cusiony surface. Although, at times we had to go over wooden bridges and there was still frost on them that made it slippery and a few pages of ice on the road in the park. But we pushed ourselves to keep going. I pushed myself and the girls. I had saw a spot before we entered that area and told the girls we could walk until that spot, but realizing that was much further then I thought I encouraged them to start jogging again. We came out of the trail and hit the 3K mark! We cheered!

Only two more K’s left! How exciting! We can’t walk now! Besides the one hill that we walked at a fast pace. I pictured where we were on our regular route and told the girls. I hope that was encouraging! Then the 4K mark. I am going to make it! We are going to make it!

We turned a corner and Julie says, “I better see the finish line!” There it was. But it still seemed far away! We turned onto the road that the finish line was on and Sue was already ahead of Julie and I and she was booking it! Then all of the sudden Julie starts going faster and faster! Oh no, I gotta get going! So I ran right beside her and we finished the run!! We finished out of breath, but we finished!

We completed the run at 40min. First Sue, then Julie and then myself. I must say that Julie and I did come in at the same time of 40 min and 23 sec. 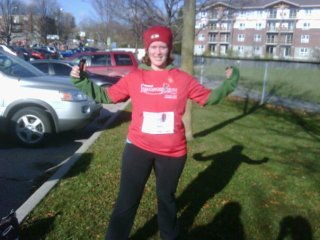 We are so excited that we stuck with the Coach to 5K and that we accomplished our goal of completed the 5K Remember Run. Thank you to all who have been reading about my journey of running and to those who sponsored me financially. I was able to raise enough money to recieve a gift certificate from Socouney at Runner’s Choice. I hope to get a new pair of running shoes!

We still have two weeks left of the Couch to 5K to go and we will finish it. I’m not sure what is next. We do know that we won’t run outside during the winter months. Maybe we will do some kind of indoor exercise video or something. We do know that we want to start running again in the Spring and beat our time in the Remember Run next November. The lady who won 3rd place in our category ran it in 30min. I think that for us running it in 40 was awesome. Next year, maybe we can be at 30 minutes too!!